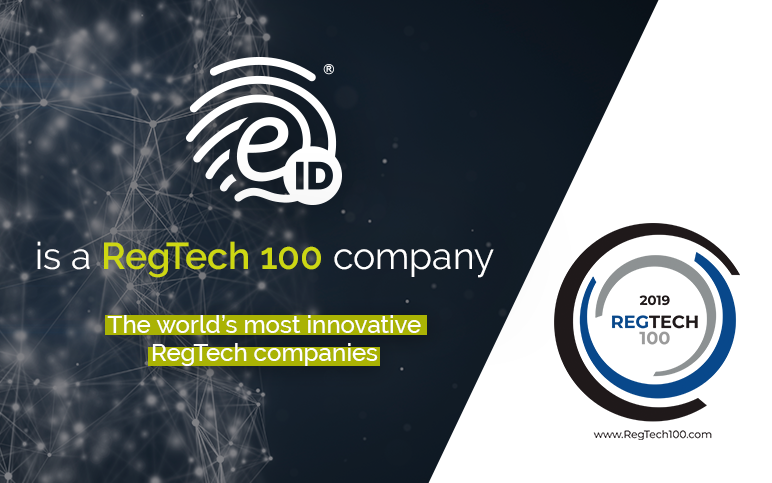 Electronic Identification has been designed for the second successive year as 1 of the 100 most innovative companies in the world Fintech Global.

In  RegTech100’s own words, “these are the companies that every financial institution should know when considering and developing their digital transformation strategies, as well as critical mission”.

The process to select the 100 leading companies was even more competitive than last year. The list encompassed 824 businesses against 416 last year. And yet, despite fifty-five new companies enrolling in Regtech100 this year, eID keeps its place as one of the references at a global level.

To be in the top100, you need to be acknowledged for the savings and effectiveness improvements in complying with financial regulations and offering an innovative use of technology for resolving the current challenges in the financial sector.

Electronic Identification has kept its place for another year in the top thanks to the constant innovation in its artificial intelligence and machine learning algorithm. They rely on the most advanced client identification and authentication product in onboarding processes, ensuring compliance with the strictest regulatory norms at a global level (eIDAS and AML5).

Our star product is VideoID, which, by means of asynchronous identification process, attains the highest level of security, allowing the completion of the entire process in less than 40”,  thereby increasing the conversion percentage and reducing the cost by client.

In addition, Electronic Identification relies on a wide range of identification, authentication and verification products, which allows businesses to adapt themselves to different levels of risk.

eID not only complies with these norms but also offers a greater security and identity management, improving the control over fraud and generally simplifying the procedures.

RegTechAnalyst, a specialist investigation firm acknowledged at a world level, has announced the list of the world’s most innovative technology solution providers who have faced the challenge of grappling with regulatory problems in the financial sector. The list acknowledges the pioneering businesses who are transforming compliance and cybersecurity, as well as risk management, all this using the latest technologies such as Artificial Intelligence, Blockchain or biometry.

In the course of the current year of 2019, 824 businesses (last year there were 416) were voted for by a panel of analysts and industry experts.

The list continues to be dominated by European businesses, with a 60% representation, followed by North American companies with 29% of the spots. Within Europe, British businesses grew slightly compared to the previous year, and it is worth mentioning that there are 21 new entrant country, like Switzerland, Singapore, India and Luxembourg amongst others.

The industry is continuing its rapid annual expansion, and a sign of this is that 4 billion has been invested in companies since the beginning of 2016.

In 2012, more than 300 million dollars were invested, around 80% only in North America, whereas in 2017 it reached a billion, 41% in Asian and European businesses.  It is worth pointing out that 75% of the companies in this sector are concentrated in areas like the United States, the United Kingdom, Switzerland, Australia and Ireland.

The big finance companies estimate that between 10% and 15% of their staff will have to work on compliance as a consequence of the new regulations they have been subjected to. A Thomson Reuters study confirms that 28% of the companies outsource their regulatory norms compliance tasks.

Should you wish to see these 100 companies that every financial institution should be aware of in 2019, these are available at www.RegTech100.com